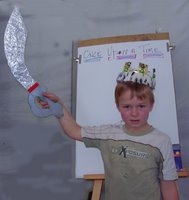 A little bit of story magic happened at Southbank this weekend. Well actually more than one bit.

First of all I was having great fun at the Brisbane International Film Festival Family Fun Day Story Creation workshops as part of the SpeakOut Team. I was working with the participants - children - helping them to create their stories and write them on a piece of butchers paper for them. These sheets of butchers paper became their 'auto cues' as they recorded their voice over and created a short movie with some help from the team on Sony Vegas.

The theme was 'Princes and Princesses' and wonderful stories about brave and courageous princes and beautiful and strong princesses and witches and castles and dragons and all sorts of wonderful creatures were being created and burnt as movies to CDs.

Now, a father and son were interested in doing the Story Creation. The son was keen but the father was clearly distracted. 'Oh my wife is over there. Our younger son has developed a curious phobia. He doesn't want to step on any pebbles.'

Well something went 'Bing!' in my mind and I thought, 'A story. That might work.'

I walked over to the pair and, kneeling down, said to the boy, 'Would you like a story?' He looked a little reluctant but I began telling him a story about a pebble that was crying because he didn't like people standing on him. A good fairy came flying down and said, 'What's wrong little pebble?'

Did the boy take that step off the pavers and onto the pebbles? Yes! He did!

I'm glad that once upon a time, a long time ago, I read 'Annie Stories' by Doris Brett.
Posted by Austories at 10:11 PM No comments:

I just got back from a great Sunday bike ride with my friend Bill around some of Brisbane's wonderful bikepaths and I don't know whether it was having coffee at the Venice Cafe or the wonderfully human conversation with the Dutton Park ferry driver about the new green bridge construction or even if it was just ironing my new 'I do digital stories' T-shirt in preparation for the BIFF Story Creation workshop down at Southbank but I thought, 'I really should put up a link or two about where people can find some more digital stories to look at.'

After all, If families do enjoy the workshop and go home with their own digital story on a CD they might be inspired to look for more.

Here are a couple of links.

For Queensland digital stories you really can't go past 'Queensland Stories'. It's a site created by the Qld State Library Service and contains digital stories created all over Queensland. If you want to see some young people's stories do a search for Chermside and there you will find some stories created by teenagers living in the Chermside/Wavell Heights area that I had the privlidge of helping.

Another fascinating site is the Shoebox Stories at the BBC Wales site. This is the school age stories link but there are adults stories there as well. I like Michael's story about his best friend.

Well there you go. I'll have to tell you how the workshop goes and maybe have some photos from it as well. Today the theme is 'Princes and Princesses' and next week it is 'Environment'. Should be lots of fun.

Let me know what you think about the Chermside stories and what your fav. Shoebox story is please. I love them but I love to know what other people think.

Regards
Daryll Bellingham
Posted by Austories at 11:24 AM No comments: