I got a pleasant surprise yesterday to be rung up by Deb Tribe at ABC local radio in Adelaide and asked if I would do an interview about the Pied Piper of Hamelin for Rat Catchers Day.

How could I possibly resist? The 26th of June should be celebrated. Deb had done a google search and found my version of the story and wanted me to do a three minute version and talk about whether it was true or not.

It was the sort of challenge I couldn't resist. So I googled the Pied Piper of Hamelin and found all sorts of information about it, as you invaribly do with Mr. Google. There is a 'Rattenfangerhaus' in Hamelin and on a wall on it is inscribed the very briefest version of the story I've heard and the date 1284, 26th of June.

Well the live, telephone telling went well - I think. There was just enough room before the news to answer a couple of questions and off I went. Still I wasn't terribly satisfied. I think I wanted to tell one of my rat catchers stories. I suspect we've all got them. Rats are so ubiquitous.

My favourite involves not the famous rat catcher of Hamelin but the humble rat catchers of Brisbane. You see the good councilors of Brisbane in their wisdom employed a squad of rat catchers to go about the town with their faithfull fox terrier doggy companions and dig up and kill rats. They could wander into your back yard sniff around your compost heap or under the pile of firewood and dispose of any rats they found. They don't employ them any more unfortunately but when I was a wee lad they added a little colour and mystery to suburban life. Now one day I got home from Mitchie High to discover that my mother had been thinking of me again.

When the rat catchers had come through the yard that day and found a rat nest, she asked if they could leave one of the cadavers for me to take to my biology class and dissect. Well you can imagine I was pretty pleased about that and sure enough that furry evidence of the rat catchers of Brisbane's trade did contribute to my knowledge of mamalian anatomy.

So a toast to the Rat Catchers of the world. May you take up your silver pipes and your fox terriers and go forth to give us more stories to tell.

p.s. there is supposed to be a Grimms version of it but can't find it in my 'Complete illustrated stories of the Brothers Grimm'. Anyone know what it is called?
Posted by Austories at 7:07 AM No comments:

Nambour railcast on the way to Bundaberg 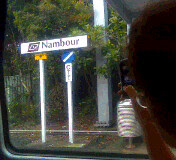 Nambour railcast
Originally uploaded by Austories.
Karen and I were invited to lead an Introduction to Digital Storytelling for Community Cultural Development workshop in Bundaberg on Saturday 17th February. It was great fun and, very sensibly, we opted to travel by train. It was our first trip on the tilt train and, quite frankly, it was great.

What a sophisticated way to travel. We were persuaded to book business class and were glad we did - room to do some workshop preparation, plug in laptops and mobile phone chargers and have a nice meal as well. All the time a very green and damp landscape rolled by for us to enjoy.

We managed to use our mobile phones to take photos and email them to our blogs like the photo above and one we created especially for the workshop. Not that there was coverage the whole time but there was usually enough around towns to get off an email to a blog or collect messages.

The Bundaberg crew was great and we are waiting to see how they go. I'm predicting a quite amazing digital storytelling community cultural development project is going to rise like a Wundabird from Wundaberg.
Posted by Austories at 2:48 PM 2 comments:

Had the pleasure on Friday and Saturday of dropping down to the park in the middle of Deniliquin and enjoying the delights of the Sun Festival.

It was very easy to be at. The weather was very pleasant. There was a good balance of sunshine and shade from heaps of trees. There was music ( jazz ), icecream, Dennis Murphy's excellent puppet show entertaining young and old, a small market, a range of different activities for kids, vintage car display and more. There was water in the billabong and birds and kids in the trees. Generally speaking, people were behaving quite well as well. It was easy to be there.

The organisers were to be congratulated. The world, at least that part of it, was a better place because of it. I wonder how we can do something similar more often in our lives?

I suspect that a goodly portion of how it worked was a spirit of cooperation. There was nothing desperate about it. When little bits of distress surfaced it was pretty easy to not take notice of them and to concentrate on the beauty of the park and creativity of the people in it.

I wonder what it would take to get that to happen more on the national and global levels?
Posted by Austories at 10:01 PM No comments:

Been down south in Deniliquin for a couple of weeks over Christmas and New Year and starting to feel like I've been on hols. We went for a bike ride with young Peter this afternoon. Out through the houses and into the bush. The roo tracks and forestry roads make for great fun especially when they zoom down into the dry old river beds or billabongs. The forest is so dry with summer and drought. Everything is crackly but then it's down to the river with its gently flowing irrigation water. 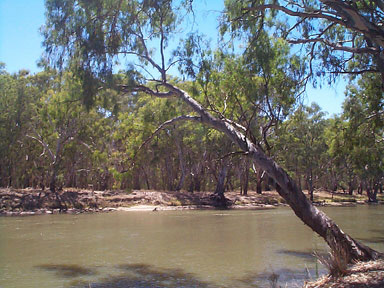 It's such a luxury to be riding along beside a river and not being on a concrete or bitumen bikepath - ducks, blue wrens, cormorant in the water.

Wwwwhhhh. What's that. Kangaroos bounding off. Sorry kangaroos. You could have stayed.
Posted by Austories at 10:05 PM No comments: