What is the name of the tiger in The Life of Pi by Yann Martel?

We made it back to Brisbane in time for the floods this time.

Not that our house was flooded, it was long ago placed carefully on a hillside and I'm grateful.

We did lose power however. One of our neighbourhood trees in Dorchester Street stopped holding on for a second or two in the wild wind and that was all it took. The powerlines tried to catch it and, with some help from an optus cable and at least four poles, they did, but the power leaked everywhere until some kind person or machine turned off the switch and plunged us into darkness and refused us entry into the world of the Australian Open Singles final story.

Oh well, I had worked out who was going to triumph in that particular hero's journey when ex-cyclone Oswald took his revenge.

Perhaps more meaningfully, I did get to realize how dependent on electricity I have become - no power, no fridge, no computer and no TV and not much awareness of the trauma a whole lot of people went through with the 'cyclonic event'.

We did get to enjoy lots of candles and to realise how humid Brisbane can get even the wind is 'cyclonic'. The treat last night was getting out the little green ukulele after our dinner by candlelight and playing and singing songs to each other.

Earlier we had sought refuge in a nearby cinema, air conditioned of course, and were suitably entertained by 'The Life of Pi'. As Pi and the tiger were surviving great storms in the Pacific in a lifeboat, Oswald was wreaking havoc further south and, tragically, drowning two Asian backpacking farm labourers in the Lockyer Valley.

'Life of Pi' is a quite wonderful story, magically created on screen from Yann Martel's Booker winning book. I was also suitably entertained by the main point of the story, ie 'God is the more interesting story.'

After that fertile conditioning in the air conditioning, I was most certainly ripe for the subject line of an email/facebook/blog post I bumped up against this morning when we finally got power back - 'Tall Tales - the strength of storytelling'.

It wasn't bad and wasn't brilliant, well it lacked a bit after 'Life of Pi in 3D' and the wild Oswaldic winds. It was really an essay on why business people should tell stories. It has some nice points. One of the quotes from Alison Esse is, “Storytelling is the original and most powerful form of learning and sharing knowledge.”

That led me to thinking about

'When did storytelling evolve?' 'What came first, oral stories or visual stories?'

I looked online and, although it is a pretty murky area of research, it would seem that it was most likely to be oral storytelling. The first cave paintings were only 30,000 or 50,000 years ago and it seems likely that human speech has been around for a couple of hundred thousands of years.

So storytelling came first. Sorry writers and painters and sculptors and directors.

It also took me on a journey to another post on another electrically powered blog called - 'Your brain on narrative: evolution and the story rope' by Andrea Pitzer. 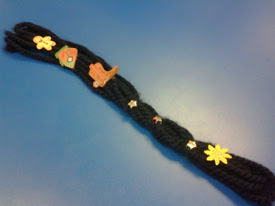 Which leads me to the story rope. I hadn't heard of them before but teachers probably have.  They're a bit like charm bracelets. Imagine a 'rope' of plaited wool and inserted into it in a line is approx 7 studs - one for a character, one for the setting, one for the problem, two or three for complications and a bright sunny one for the solution.

The one in Andrea Pitzer's article has a ginger bread man, a house, a cowboy boot, three small stars and a sun, respectively.


I wonder what symbols the storytelling rope for the 2013 floods would need? I think we could reuse the sun at least.

Oh the tiger was called Richard Parker. I probably should say tigers. Want more? Only go here if you don't care about tiger or tigers.
Posted by Austories at 10:34 PM No comments: