There are moments in a storytellers life that are even more satisfying than others. At two o'clock this afternoon - Monday 4th December, 2006 - I got to enjoy one of those.
Brisbane City Council Councillor Geraldine Knapp (The Gap) was handing over CD's of the Enchanted Forest recordings, artwork and project photograps to the students of year 3H at Ashgrove Primary. The Enchanted Forest Playground project had been funded by her Council Ward Community Grant program.

I had the pleasure of telling them how much other children from all over South Queensland had been enjoying our stories and of telling them one of the new stories that had since been created at another school. 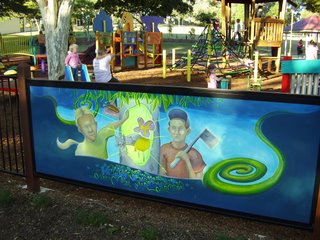 'Well it didn't take long at all. The Enchanted Forest is a bit like that. The boy found the Fairy Queen. He borrowed a silver axe. He found the disappearing tree beside the smelly bat cave and, as quick as you can say 'grotty green goblin', he'd cut a hole in the tree and rescued his sister, two butterflies, a golden beetle and a muddled up wombat.'
(One of the panels created by Gavan Fenlon illustrating one of the stories and using details from children's artwork at the Enchanted Forest Playground in Dorrington Park, Ashgrove.)
It was great to see them enjoying hearing their own voices telling our stories. They were so excited. They were telling me about visiting the playground and about how some children had damaged the story playback equipment.

When I was leaving I said, "Well of course you could go on and write some more Enchanted Forest stories."

There was a silence as the possibility sank in and then one girl said, "With the same characters?"

I think she might.
Posted by Austories at 9:45 PM 3 comments: