Took a break on Saturday and went down to the West End Markets to see who we could see. Caught Jeremy Youse busking with his usual flair and energy. He's added a top hat symble to his line up. Sounded good.

Met a few other friends, had a curry puff and a cup of coffee and couldn't resist an old copy of 'Mother Goose's Fairy Tales : Retold in Easy Words Chiefly Of One Syllable'. It's undated but probably from around 1950 or so. Had a mix of stories some of which I had not come across before but, really, it was the illustrations, especially the colour plates by G. E. Breary that sold me and anyway it was only $3.

The stories and characters are so English. All the children are rosy cheeked, the girls have bows in their hair and the boys quite Elizabethan in doublets and hose. Of course boys and princes rescue girls and princesses. Good manners triumph over just about everything else and, yes, most of the words are one or two syllables.

Here's an excerpt from 'The Giant Hands'
'Willy lay down that night with a heart full of thanks that he had met so good a master, and thought f his home to which he hoped soon to go back to make his fond mother smile once again.

'He was nearly asleep, and his thoughts were in part mixed with dreams, when a loud shout of "Fire! Fire! roused him.

'Up he rose and dressed quikcly, while the cries grew louder and louder. He ran down stairs. the smoke nearly choked him, for thehouse was on fire. He rushed into the farm-yard where he say his master, with the maids, in a great fright; no water at hand, no fire-engine, every one shouting, the pigs squealing, and the geese cackling.

' What was to be done? The staircase was burned, the flames ran from room to room, and there at a bedroom window stood (can you guess) the farmer's daughter with the smoke all about her; very soon it would be too late!

'As Willie looked on and thought what he could do to save the poor girl's life the giant hands were seen to place themselvers by the side of the house in the form of a ladder, and up this Willie sprang quickly. Soon he reached the window and seized the girl in his arms; he then rushed down and placed her, safe and sound, in charge of her father.'

Aaaaaah! Goodness prevails. Order is restored and the GIANT HANDS are revealed to be the HANDS OF INDUSTRY - known to many and always ready to help the willing and the good.

'The Farmer's Daughter Gave Him a Kind Glance' 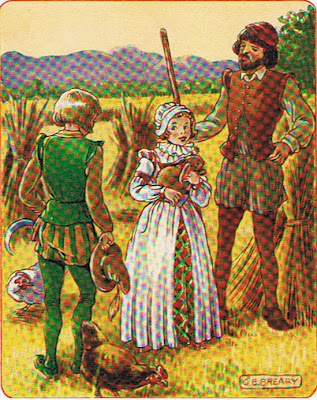 In some ways its all of another age. Or is it. Princes are still rescuing people although, these days, its from a helicopter. I must have been exposed to similar books as a child but I suspect even then I was cringing while knowing that I had some sort of cultural access.
Posted by Austories at 8:50 PM No comments:

Enjoyed a cup of chai and an interview with Ian Kath, local West End podcaster this morning. I'm looking forward to seeing the post on his podcast yourstorypodcast.com and another on CreateYourLifeStory.com .

Mind you the conversation before and after about storytelling and stories and audio software and iLife etc, etc was just as interesting. One of the things we talked about was human consciousness and how it was related to language and story. How do we learn about story structure? Is it scanned by the baby brain like language sounds?

What stories we choose to tell and what we include in them, feel safe to include in them, I find fascinating. I'll be interested to listen to some of my own stories after the editor has his way. Oral History and Life Stories make such important contributions to cultures it's well worth encouraging the practice.
Posted by Austories at 2:29 PM No comments: