Sat in one of our neighbours loungeroom today and shot an interview. What a life story unfolded as 91 year old Nadia told us her life story of growing up in the Russian enclave Chinese city of Harbin, surviving floods and wars, epidemics and poverty and eventually emigrating to Australia. I'm really looking forward to recording more of her stories and putting them together as oral history recordings and digital stories.
Posted by Austories at 10:01 PM No comments:

Karen and I went for a walk this afternoon to see if we could spot a curlew or two. Not that I was very confident, we hadn't heard their spooky night calls for a few weeks at least.

We had a look at the excavation site. It looked like any big hole in the ground and then walked around into Graham Street to see what had happened to the houses there. We'd been told they were being resumed.

Well Karen knocked on the door of one - she's good at that - and this time there was someone home - a really interesting someone with lots of stories to tell. Well I hope so anyway, Nadia is 91 years old and has lived there in Graham Street for many years.

She has many stories to tell - from China, from her Russian community, of being involved in the local 'Gabba community and of not wanting to leave her house.

With a bit of luck we'll be able to record some of her stories for her and maybe create a digital story or two.

Oh yes, she's upset about not hearing the Bush Curlews for sometime either.
Posted by Austories at 11:59 PM No comments:

Really enjoyed one of those end of year catch up parties yesterday at Getano and Rae's house. It had everything you could ask for really - old friends, new acquaintances, barbque, bocce in the backyard, music, singing and drumming. A good time was had by all, well, almost.

There was a three and a half year old boy there, the only boy and the only one of his age. You could tell that being with adults really wasn't as good as it could be.

I was impressed by the way he joined in with various percussion instruments as we jammed and sang but he really came alive when Getano suggested I tell a story. I told my 'Little Blue Train and the Ghost Story' and the transformation in Rohan was immediate and joyful. Now the shakers could be used for train noises - yes! Now he join in with the story and the smile on his face was so infectious.

Whereas previously I had been a friendly stranger, now I was the provider of a story just for him.

It was a good reminder of how important it is to be really inclusive. So thank you Getano and Rae for the party and thank you Rohan for the reminder.
Posted by Austories at 11:27 AM No comments: 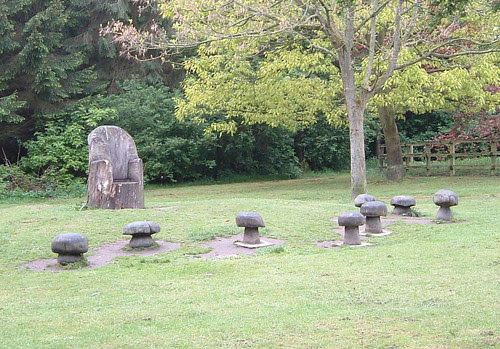 Came across this on Flickr and couldn't resist. Mind you I'm not so sure how much I'd like to tell there but I'd sure like to try some time. It's in St Ives in West Yorkshire and was taken by 'Janet 59'. Anyone been there?
Posted by Austories at 9:40 PM No comments:

A Story for Slippery Financial Times

There have been a number of times lately when I've realised that I, and many other people around the world, have not kept their eye on the ball. Watching the value of superannuation investment falling rather precipitously has been quite unsettling for quite a lot of us. So as I was reading my bedtime story from 'Classic Folk.Tales from around the World', I came across a rather nice Irish story that seems to sum up a quite a bit of the current situation. It's called - 'The Basket of Eggs' and goes something like this.

There was once a fine woman and she was on her way to market counting the price of her basket of eggs as she walked.

"If eggs are up," says she, "I'll be getting a handful of silver, and even if prices be down I'll not do too badly at all for I have a weighty supply."

With that she noticed a wee little boy sitting down by the hedge, he stitching away at a brogue.

Now everyone knows that if you manage to grab hold of one of the little people and keep your eye on him at all times he will lead you to a pot of buried gold.

She juked up behind him like a cat after a bird and she caught him a strong grip of his kneck. Well he let out an odious screech for he was horrid surprised.

"Will you show me your treasure?", says she.

"You're a terrible fine woman, mistress dear," says the leprachaun, "I've travelled a power of the earth and I never came in with your equal."

"Go on with your old fashioned chat," she replies and pops him up in her basket on top of the eggs, all the time keeping her eye on him and a good hold of his ear to make sure he didn't escape.

Well as they walked on, him giving directions and keeping up his flattering banter, what did he do but reach down into the basket with both hands and begin to bail out eggs onto the ground behind them.

She fetched him a terrible clout, but the harder she beat him the faster he threw out the eggs.

"Stop! You unmannerly coley,' cries she.

"Sure it's doing you a favour I am. Every time an egg dashes to the ground a well grown chicken springs up."

"If you doubt my word," says he, "Just look at the fine flock of chickens that is following us."

She could resist the temptation no longer and turned to look and, with a twist and a spring, the leprachaun slipped from her grasp and disappeared under a hedge.

"The wee lad has fooled me entirely and my eggs are ruined but it's a good thing to know that I'm the finest woman he's seen across the wide world, that it is."

p.s. 'Classic Folk-Tales from around the World' by Robert Nye does have some classics and some quite good stories as well. One of the disappointing things however, is there is no record of where the stories were collected or copied from. If anyone knows, I'd appreciated hearing.
Posted by Austories at 2:28 PM No comments:

Mmmm - another Storytelling Guild Lounge Telling. They really are a very sane and entertaining way to spend an afternoon and evening. We lots of shared lots of 'bring a plates', shared conversation, shared stories and shared laughs. The world would be in a much better way if it spent more of its time in Lounge Tellings.

One of the highlights was a visiting storyteller from Sweden - Kerstin Thuresson. She regaled us with Swedish Folktales mostly - some we knew and some we didn't but it was all great fun.

"I mostly do performances in different culture houses, stages and festivals all over Sweden. I love folktales from all around the world and I'm extra fond of those who have a bit of humor in the end. I do also love the stories from India. I sometimes tell what we call Life Stories: screamingly funny things that has happened to me in my own life, a bit extra salted/spiced. I also do a special performance with stories about strong women on the International Women Day every year.

I’m the secretary of the non-profit association of Storytelling on the West Coast of Sweden. Comparable to your Guild, I think.

The Swedish storytellers are organized in approximately 8 geographic non-profit associations. An these associations are organized in one national association: Storytelling Net Sweden, an approximate translation. We have two big festivals every year, the biggest a week long in June every year is also the oldest and they celebrates 20th anniversary 2009, the second one has ran for four years and lasts over a weekend."

It's good to know that storytellers are so well organised in Sweden. If you are interested in Guild events the best way is to visit the blog and join the Guild and the email list.
Posted by Austories at 3:45 PM No comments: