2008 a brand new year of storytelling

Well 2008 is off to a good start. The TownAce's engine has been rebuilt. It's got a new battery and my storytelling energy has been renewed by some time near waterfalls and rivers and forest.

I wonder what wonders 2008 will bring?

We have an exciting project happening with the Indigenous Elders of the Inala Yarning Place Singers. It will finish with a concert and DVD. It's great working with Aunty Vi and Aunty Edna with K.B. and Getano Bann.

In May we're looking forward to working with Elders in the Northern Territory community of Ali Curung.

I'd really like this year to get some of my own CD's and DVD's together as well. Any suggestions?
Posted by Austories at 9:12 PM 2 comments:

We're Off to See the Wizard

Well we didn't follow the Yellow Brick Road, it was the New England Highway and the Newell all the way to Deniliquin. The wizard is Karen's father and he's a wizard at growing tomatoes and book-keeping and he's not bad at telling a story or a yarn when he gets going as well. 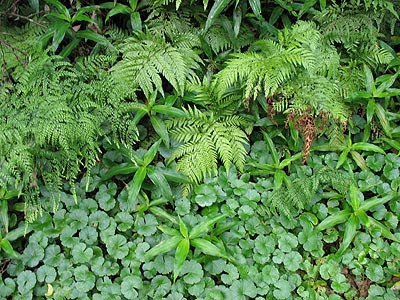 The drive down, 2 days, was safe and relatively uneventful. We noticed our regular markers of progress - Cunninghams Gap rainforest, the church at Warwick, the turnoff to Giraween National Park, the location of the old state border gates at Wallangarra, the old emu and kangaroo farm gate posts south of Uralla etc.

They all tell little travelling stories. This time though we can add some different markers.

There was a TV cameraman vidoeing a bunch of flowers left near the site of a tragic truck/car smash that claimed the lives of four teenagers near Warwick. That reminded me of another dramatic smash scence we had driven past on the Newell Highway some years back. A truck driver had gone to sleep and driven his rig through a caravan, totally obliterating it and smashing finally into a substantial ironbark. He looked very dead.

On a brighter note, we finally stopped at Mother of Ducks Lagoon at Guyra, something I've been meaning to do for years. Wasn't much water in the lagoon (in fact it was pretty much dry) but it was good to read about how the local tribe had lived around it and used it for so long.

The Xanthorrheas in the burnt Goonoo State Forest south of Mendooran that had been so easy to see against the blackened and blasted landscape last trip were now casting seed and starting to merge into the regrowth of ironbarks and daisies and acacias. 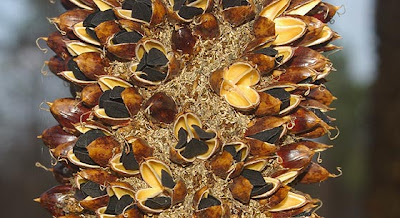 As we walked around taking photos we disturbed a small stick exposing the white ants underneath to the marauding meat ants. They charged in, seized little golden termites in their pincers and galloped off towards their nest.


There is something very affirming about seeing this regrowth happening. The hard black Xanthorrea seeds will find their place in the soil ready for the next bush fire to create the right conditions for germination. These ecosystems worked out how to adapt to fire long ago. I wonder if we humans could be smart enough to take advantage of fire like this? Aboriginal communities all over Australia have been practicing 'fire stick grazing' for millenia. We should be able to come up with a whole range of possibilities.

Further south, at Alectown, between Peak Hill and Parkes, the garden full of whirlies and gnomes and fairytale characters was still stripped bare and the for sale sign was prominent by the front gate. Last trip Karen stopped and asked what had happened from a woman living in a converted church. Turns out the old man who had been entertaining travellers for years with his quirky garden had passed away and the house had been put on the market. I guess the estate agent said it wouldn't sell with the fantasy garden in place, so it was packed up and sent to the tip.

Karen won the 'who'll see the first emu' bet in a very dry paddock around the turnoff to Urana. I remembered the emus we came across down in the Gulpa Forest one year and the one I nearly collided with when it came charging out of the scrub on the side of the road up near Blackall in Queensland. Jerilderee's lagoon was still dry and waterless. The further south we drove the drier it got.

The Wizard of Oz is still growing tomatoes and doing the BAS for the motorbike shop however. He's keeping the birch tree and his vegie garden alive against the prevails of the drought. We got to Deniliquin just in time to go down to the rissolle with him for tea. I had the roast of the day and a light beer and we toasted the New Year and our journey down that long bitumen road.
Posted by Austories at 9:26 AM No comments: